← more from
Sonic Peach Music
Get fresh music recommendations delivered to your inbox every Friday. 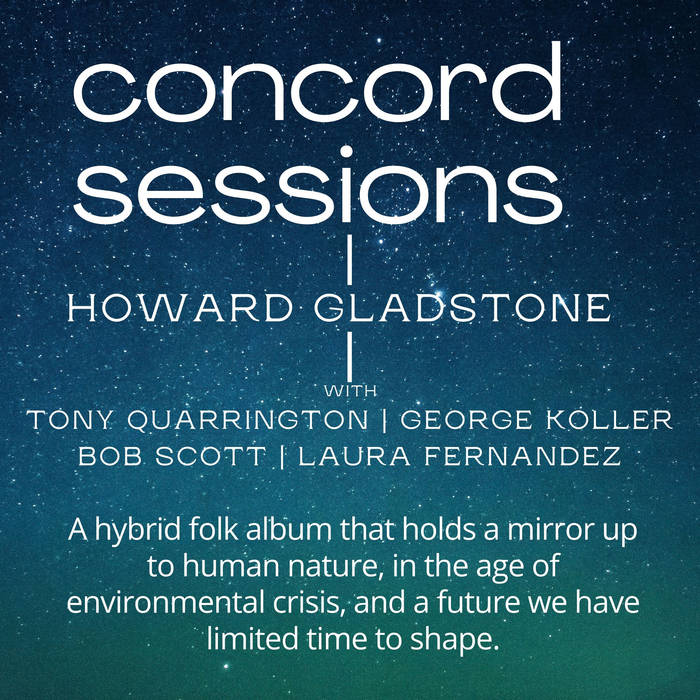 A hybrid folk album that holds a mirror up to human nature, in the age of environmental crisis, and a future we have limited time to shape.

Recorded live on the studio floor by songwriter Howard Gladstone and guitar/bass/drum trio.

Three years after suffering a spinal cord injury, surprising even myself, I recovered sufficiently to record the album Hourglass. That album focuses on healing.

Immediately upon finishing Hourglass, I asked the same musical crew to return to Peter J. Moore’s Concord Avenue studio the following week, and we recorded these tracks. The album was put on hold for four years.
In mid-2021 I asked Peter J. Moore to finalize mixing the tracks we had recorded in 2017 and master the final versions.

These are the Concord Sessions. These songs step back, and then re-focus on the broader picture of where we humans are at collectively as a species. There are themes such as activism and protest, the environmental crisis, human nature and history, forced migration and the plight of refugees. These are songs to help heal the planet.

What you hear is basically how it went down and sounded in the studio over the two-day recording period. There are no overdubs. The only thing that was added were background vocals. It’s recorded in high resolution audio so every nuance and wrinkle is audible.
- Howard Gladstone, August 2021

THE SONGS
“Building A Fence” opens the album. This is a seemingly light and upbeat blues tune about “building a fence from Mexico to Hong Kong”, and with a note of warning in the chorus – “rider soon at your gate, and your city will burn”. The themes of walls, privilege, separation, and impending crisis are introduced. These ideas are touched on throughout, sometimes just below the surface like an underground river.

On the downbeat of “Building A Fence” you hear George Koller on upright bass on the left channel, Tony Quarrington on acoustic guitar on the right channel, and Bob Scott on drums in the middle and spread to both sides. After the band does an instrumental verse, my vocal and guitar enters in the centre. This instrumental placement remains constant and provides a very wide and open soundstage.

“Occupy” is inspired by “Occupy Wall Street,” but really it is about the “exile volunteers” who animate any protest movement with an emphasis on the optimism, the struggle against overwhelming odds, and the never give up attitude. There is the eternal hope that “things will be better next year.” The chorus pays subtle tribute to Billie Holiday’s “God Bless the Child”.

“Love In the First Degree” is a duet with Laura Fernandez. I wrote it in 2015, during the depth of my dark period, as a test to prove to myself that I could write. It’s a sweet little thing and lightens up an otherwise somewhat somber album.

“It All Falls Down” visits the themes of human development and what we are doing to the world through greed, ignorance, and missed opportunity. It’s a skewed waltz that turns into a forced, brutal, chaotic, and irrational stomp through history. Pete Seeger asked, “When will they ever learn”?And the answer is, sadly, they probably won’t. Or maybe, against the odds, we will - “Never give up hope/ It may be better next year.” This was a new song when recorded, but I created another version in 2020 which appears on “The Promise.” The Concord Sessions version is the original.

“Tear Down These Walls (In God’s Garden)” and “When Lightning Strikes” contain biblical and apocalyptic references and in my mind fit in the mood and themes I was developing. These are re-recordings from earlier albums, and these versions breathe new life into the songs.

“The World’s Become A Warmer Place” is the longest song and most specific in dealing with climate crisis, plight of refugees and human nature. In the song “rafts and boats are overloaded” with desperate refugees and are transformed into Phoenixes lifted into space. A mythological bird carrying humans to salvation is not a literal suggestion, just an imaginative reaction. Maybe it is an unconscious reference to Neil Young’s “After the Gold Rush.”

The lyric rambles around, perhaps never quite touching down, but hopefully shedding light and insight on this complex of knots that the world struggles to recognize, let alone untie. Does the song work? Not for me to say. I love the instrumental bedrock laid down by Tony, George and Bob on this song. In the second half of the song, they soar.

I later wrote another version of the song, to focus more tightly on the environmental crisis. It is called “Crossroads” and appears on my 2020 album, The Promise. I like both versions and cannot choose one over the other.

“Regret” was originally recorded with the trio, but I found the vocals easier to deliver and more convincing with piano. George Koller added the bass line on “Regret” which is about living without regret, if possible.

THE STUDIO and THE PLAYERS

The album is named Concord Sessions to honour the “E-Room” – the Concord Avenue studio of Peter J. Moore on a pleasant residential street in a Portuguese neighbourhood in west end Toronto.

This is a recording studio with character. The Grammy that Peter won for re-mastering Bob Dylan and The Band’s “The Basement Tapes” sits casually on a side-table. Garth Hudson later recorded his versions of classic Band songs in this studio and brought in musicians including Neil Young to participate. Roots run deep here.

The studio has retained the look and feel of a working-class house except for a modern control room with acoustically treated, octagonal walls, focused lighting, and cool vintage gear.
The main recording space is the former living room. The ceiling slopes upwards into an acoustically sound half V-configuration with skylight. The room was shared by three excellent players on guitar, upright bass, and drums for these sessions.

A separate, smaller room functions as the vocal booth. Here I did vocals and simultaneously played acoustic guitar with the trio.

Tony Quarrington on acoustic guitar, George Koller on stand-up acoustic bass, and Great Bob Scott on drums were the core. These natural musicians find ways to play innovative parts that suit the song but not restricted to the confines of genre.

Each song was charted by Tony, a tempo indicated, but much was left to the musicians. The ensemble ran through each song, and we laid it down. What you hear is what werecorded over two days with no overdubs.

George, Tony and Bob were positioned around the Calrec microphone in a technique used by Peter J. Moore in his ground-breaking recording “The Trinity Sessions” by Cowboy Junkies to give a coherent and unified sound field. This was later used to advantage in the mixing process to give a unique sense of space.

Laura Fernandez adds the haunting background vocals on several of the songs. Laura also plays the piano part on the closing tune “Regret.”

THE TIMES and A WARMER PLACE

This project was initially called “A Warmer Place,” from the tune “The World’s Become a Warmer Place.” That is word play on the dual meaning of warmer. In 2017, the world grew warmer and colder at the same time.
In that year there was a backlash to the flood of refugees from the Middle East into Europe, and from South America/ Mexico to the USA. There was a rising wave of intolerance against the “other,” promoted by the then President of the USA. Politics of exclusion and division were on the rise. Corporate capitalism grew stronger. The effects of climate change were becoming more apparent. The news was filled with reports of human trafficking and sinking refugee rafts and boats. A shocking photo of a drowned refugee child horrified the world. But nothing seemed to change, and business went back to normal as the news cycle revolved. As the world was warming, warmth and empathy was in short supply.

I was impressed by the book “Sapiens” by Yuval Noah Harari, and his explanation of how homo sapiens had evolved over the last 10,000 years.
Stephen Hawking, the brilliant astrophysicist joined others in the idea that humans had less than 100 years to solve the environmental problem, and advocating that efforts be made to send colonies to space.

All those disparate elements somehow made their way into the songs in various ways and permeate the album. As did the influence of songwriters, singers, seers, prophets, doom sayers, hopeless optimists, town criers and troubadours too numerous to mention.

Howard Gladstone, Toronto singer/songwriter, releases “The Promise”, his sixth collection of original songs.
The release comes at a time when the stakes could not be higher for those struggling personally, and for the world at a crossroads.
"If you heard this music in a crowded room, you'd swear it was a lost gem from another time." ... more

Bandcamp Daily  your guide to the world of Bandcamp

Little Brother joins the show to discuss their beautiful journey, plus tunes from Fat Tony